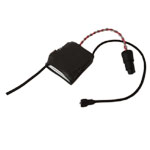 The MGT-PIXEL-NANO-3G is developed for listening audio from rooms, offices, and vehicles thanks to the mini-external PSU with the AC input power (110-220Vac), with a simple call from a telephone or smartphone.

The unit is also available with a tiny GPS antenna inside, for tracking via SMS.

The module can be hidden also in some appliances.

The system is in use in the major international intelligence services and it works stand-alone thanks to an inside battery Li-ion.

The DSP onboard makes the audio quality very clear.

The User Manual is available only for registered users.